Ariadne > Brexit means brexit: but what does it mean for human rights, equality and social justice?

Brexit means brexit: but what does it mean for human rights, equality and social justice?

The Thomas Paine Initiative has commissioned a report on the scope of protection for individual rights by EU law within the UK, and the potential impact of Brexit for the protection of these rights. The report’s author, Angela Patrick, writes below on how the EU referendum has brought the nature of our constitutional arrangements into sharp focus, and highlights that now is not a time for complacency. Ms. Patrick will present the report at an event for funders and NGOs on the 5th of December at Doughty Street Chambers, London.

Brexit means brexit: but what does it mean for human rights, equality and social justice?

The implications of Brexit for the protection of human rights in the UK cannot be predicted with certainty until the nature of the UK’s future relationship with the EU is determined.  However, an understanding of how EU law influences the protection of human rights standards in the UK may help civil society organisations inform their own response to Brexit and any proposed “Great Repeal” of UK legislation influenced by EU standards.

Even without a crystal ball, it is possible to identify some areas of law where decoupling UK law from the legacy of our EU membership could leave rights at risk.  The informed engagement of civil society, with the support of donors, may help better ensure the protection of individual rights is not diminished without care or challenge.

As the High Court confirmed on Thursday, while soundbites – like Brexit means Brexit – may be superficially reassuring, leaving the European Union involves a fundamental shift in the UK’s constitutional arrangements which cannot be resolved simply.  After days of argument by some of the nation’s sharpest legal minds, this first judicial analysis proves the road to Brexit is paved with complex legal and political questions.

The Supreme Court will now consider the scope of Executive power to limit individual rights agreed by Parliament.  For those of us working on the effective protection of equality and human rights in the UK, this echoes a bigger question.  Aside from the question of the important constitutional mechanics, how could the protection of equality and human rights in UK law be changed by Brexit?

The UK’s commitment to human rights in international law and in the common law obviously predates our membership of the European Union.  Commentators have grown weary of stressing that the protections offered by the European Convention on Human Rights are a product of our membership of the Council of Europe, not the EU.  However, the structures of the Union rest on the commitment of its members to the ECHR and a respect for human rights drawn from the constitutional practices of each of the Member States, including the UK.  Those guarantees are found at the heart of the Lisbon Treaties.

EU law provides a framework for the protection of individual rights, both in the General Principles of EU law which bind the Member States and institutions of the Union and in the Charter of Fundamental Rights of the European Union.  Those guarantees are given effect in UK law by the European Communities Act 1972 and provide an additional layer of domestic rights protection  endorsed by Parliament.  In cases where EU law applies, the protection offered for individual rights may be greater than that secured by the Human Rights Act 1998.

Designed to create a level playing field, many areas of EU law focus on the rights of individuals needed to create minimum shared standards of fair play across the single market.   From the advancement of labour rights, including equality and non-discrimination, to environmental protection, EU law now underpins domestic law central to the way the UK gives effect to many international standards.  Support and funding from the EU ranges from investment in the promotion of recognition of the rights of Roma people to the creation of a barrier-free Europe open to all persons with disabilities.  The important role played by the Court of Justice of the European Union can be illustrated simply.  Even as Parliament legislates in the imminent Investigatory Powers Act 2016 for a new statutory framework for bulk surveillance, we await a crucial judgment from that Court on the safeguards necessary for those powers to operate compatibly with the right to respect for privacy and personal information.

The referendum has brought the unsettled nature of the UK’s constitutional arrangements into sharp focus.  This is not a time for complacency.  While attention is focused on the mechanics of Brexit, Ministers remain committed to the repeal of the Human Rights Act.  This regressive trend is reflected on the global stage with increasing demands for respect for national sovereignty and retrenchment from international law standards, such as South Africa’s recent decision to leave the jurisdiction of the International Criminal Court.  The narrative at home and abroad remains focused on pursuing fewer rights for fewer people.  The work of well informed and well supported civil society ready to make the case for the effective protection of equality, human rights and the rule of law remains crucial.

We would all be best advised to be prepared.

‘Mapping the Great Repeal: European Union Law and the Protection of Human Rights’ by Angela Patrick of Doughty Street Chambers can be accessed here.

On 5th December 2016 the Thomas Paine Initiative is hosting an event at Doughty Street Chambers in London for donors and NGOs to discuss the issues and challenges raised in the paper.  To secure your place please email sarah@global-dialogue.eu 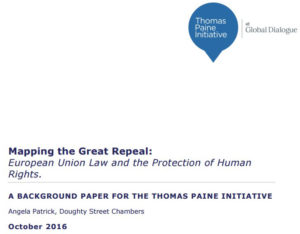