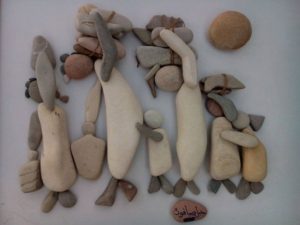 Image of refugees by a Syrian artist Nizar Ali Badr

The refugee situation is an issue we cannot ignore, so what can foundations do? A Franco-European point of view*

Today most funders would conclude that migration, in all its guises, is a phenomenon we can no longer ignore. Its causes and effects are challenging our societies in profound, structural and long-term ways. Migration is something we have no choice but to address. That said, what can and should we do? Make one shot donations? Open large, comprehensive long-term programmes? Review existing work strands?

Let’s start by taking a closer look at what is happening:

UNHCR estimates that in 2016 there are 63.3 million displaced people worldwide; amongst them 21 million refugees, half of which are aged under 18 and a third are women. Five to six million people have been displaced into Libya and Turkey, and one million into Europe. Most of the refugees who have made it to Europe have been received by only a handful of countries, namely Austria, Germany and Sweden. France, for example, received 100,000 asylum applications in 2015, a figure on a par with the 1990s.

The challenges faced by refugees are numerous and long-standing. Upon fleeing conflict refugees are at risk of falling into the hands of unscrupulous human traffickers, and the camps in which most have no choice but to remain are far from hospitable – call to mind the appropriately named and infamously known Calais ‘Jungle’. The concurrent EU crisis stokes fears that arriving populations will worsen an already bleak situation. Today’s refugees encounter violence at each stage of their pursuit of freedom from persecution, from the homes they flee to the societies in which they find themselves striving to integrate. Europe is clearly unprepared to receive refugees.

Civil society is, however, working to address the mismanagement – or total lack of management – by governments. Volunteers are engaging, civil society organisations are emerging, and others who have existed for a long time are growing and becoming increasingly visible. This can provide timely and pragmatic answers to some of our questions.

Foundations are able to respond to the refugee situation in a number of different ways; from tackling its causes (war, human rights violations, natural and economic disasters) to providing emergency assistance along migratory routes and in destination countries.

Examples of how foundations are engaging with the refugee issue

The Kering Foundation, together with a group of other French foundations, visited Calais’ refugee camps to get a better picture of the situation and how they can support it. Today they are funding projects of two NGOs (Planning familial and Gynécologie sans Frontières) in Calais; combating violence against women by supporting NGOs, social entrepreneurs and awareness campaigns; and involving Kering employees worldwide. As Kering Foundation did not have a pre-existing strategy in the field of migration they released a call for proposals, and they currently combine their engagement in Lebanon with their support to projects helping women and children in Calais.

Fondation de France has recently launched a programme on migration. Through their expertise in managing emergency situations the foundation reacted quickly and strategically, establishing short and long-term activities. Fondation de France manages private donations, mobilises the foundations under its umbrella, coordinates diverse programmes on issues related to migration, and identifies gaps in emergency activities. This is all conducted with the aim of bringing a long-term perspective to how they and their partners operate. Their international programme focuses on psycho-social support in Lebanon, Turkey and Jordan, where the foundation was already present, and solidarity and social relations will be the focus in France and Europe.

The European Programme on Integration and Migration (EPIM) plays an important role coordinating and sharing knowledge amongst foundations. The programme acts as a platform for developing programmes, pools funds for larger impacts, shares lessons learned and conducts advocacy work at the EU level.

Compagnia di San Paolo is an example of a foundation which is not new to funding migration. The foundation supports organisations to promote social integration in the long term. In co-operation with other Italian and European foundations involved in EPIM, it works on integration and autonomy of unaccompanied minors and on ensuring the full respect of minors’ rights and attention to individualized needs. Recently, Compagnia started developing a partnership programme with other Italian Foundations to provide emergency assistance at sea.

Through collaboration in learning, with field trips, mapping and commissioning studies, and in implementation of those lessons learned, with pooling funds and mobilising together, foundations can efficiently and effectively identify gaps in the response to the refugee situation which they are able to fill.

Whether these responses are short-term and emergency or more long-term strategies, foundations can and do contribute great and positive things to the challenge the refugee question brings to our societies.

*This article is based on a funders learning seminar organised by ARIADNE and Charles Léopold Mayer Foundation on 5th July 2016 in Paris.

What do love for humankind, justice and collaboration in philanthropy have in common?