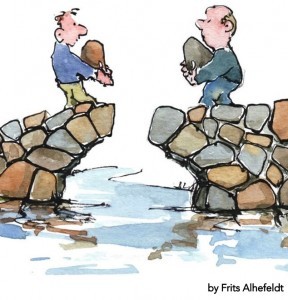 Robert Boogaard, Co-Founder of Jazi Foundation and an Ariadne member, has just finished carrying out an extensive donor survey that looked at the expectations that donors have of NGOs, and the mirror of that: expectations that NGOs have of donors. Here are the report’s findings:

Funders are much more engaged in supporting NGOs than expected. Most donors in this study were happy to share their time, experience and networks with NGOs and, in contrast to what is often thought, the majority of these donors are not necessarily wealthy.

‘Filantropie in Nederland’ (Philanthropy in the Netherlands) aims to enable donors and NGOs (non-profit organisations) to connect more effectively, so they can create more impact together.

Initiated by Jazi Foundation, in partnership with Nassau Fundraising and Rabobank Nederland, the study was supported by more than 60 organisations from the non-profit sector in the Netherlands.

The study involved not only donors, but also NGOs. Both the donors and the NGOs were asked the same questions, in mirror fashion. The differences in the answers of each allow the discrepancy in the expectations of each to be clearly  seen. Over 1300 respondents took part: more than 700 donors (at least €1000 per donation) and almost 600 NGO representatives.

Two of the main conclusions are:

The study showed that 60% of the donor respondents were not millionaires. Even more interesting was that almost half of the group had an annual income below €100,000. The size of the heart is as important (or even more) as the size of the wallet. The study also confirmed that about 75% of the participating donors said they had volunteered at an NGO in the past year.

93% of all donor respondents stated that they felt engaged with the NGOs they supported. This was more than NGOs expected (they assumed this applies to 70%). Even more interesting is the willingness to donate more. Over 60% of the donors said they want to give more than just money, in contrast with 40% average NGOs thought was the case. Apart from their financial donations, 60% of the donors are willing to give their time (NGOs think this applies to less than 30%), and 55% are willing to share their network with the NGOs they support (NGOs think only 40% are willing to do this).

There are many other interesting conclusions in the report, which is published in Dutch. However, due to international interest the main conclusions and recommendations have been translated into English.

Fast or movement led? Both! Participatory Grantmaking can move fast