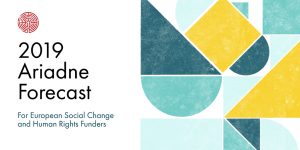 This year marks the fifth anniversary of the Ariadne Forecast. We started this project in 2015 to try to help funders get a better sense of what their peers were focusing on and prioritising, and since then it has grown in scope as we have added more countries and included more donors in our research. This year, in recognition of this anniversary, we included a question about how social change has changed over the past five years since we started the Forecast.

What emerged from this question was that, overall, philanthropy for social change and human rights has become more sophisticated, with a greater recognition of the interconnectedness of issues and a desire to get to the root causes of social problems rather than just addressing the symptoms. Discussions about “shifting the power” have also become more prevalent in recent years; donors are thinking seriously about how they can bring beneficiaries more directly into their work, whether through participatory grantmaking practices or other methods. Similarly, donors are placing more value on lived experience when recruiting for staff and board positions.

Nonetheless, while there is no doubt about how far social change philanthropy has come, there is still a sense that it has some distance to go to fully live up to the values it professes. Some donors we interviewed for this report challenged their colleagues to think about whether this is a moment for donors to radically rethink how they operate and to consider taking real risks.

The external environment remains a difficult one in terms of human rights; democracy itself is being challenged, and the far-right is making gains in elections across Europe and indeed around the globe. Sexual and reproductive rights and the rights of LGBTI people are being rolled back, and racial justice as a concept is being challenged. Civil society is finding it increasingly difficult to operate in many parts of the world, and the popular discourse in some countries seeks to undermine both civil society and philanthropy, placing more pressure on foundations to explain and justify their work.

Some may believe that at a time when the global human rights environment is under constant threat, this should be the focus of attention rather than an excessive concentration on philanthropy’s shortcomings, particularly those relating to internal biases, issues of power and privilege, and systemic inequalities. However, without our own houses in order, how can we hope to address the ills of broader society? How can we promote democratic principles without making our practices more democratic and inclusive?

2019 is undoubtedly going to be a year of change and upheaval – Brexit alone will change the face of Europe. But foundations have the potential to help create positive outcomes from all of this change. Let’s try to make 2019 a year in which philanthropy gets even closer to living up to its potential.

Fast or movement led? Both! Participatory Grantmaking can move fast