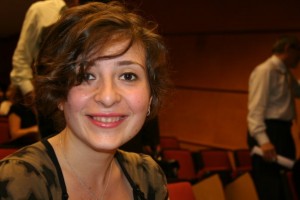 Ekaterine Gejadze is Programme Coordinator for Women’s Fund in Georgia. She came to the Ariadne Policy Briefing in Budapest earlier this month. It was the first time she has been to an Ariadne event.

If you ask me whether I was a bit nervous when going to Ariadne Meeting in Budapest the first time, I will say that I was. The first few minutes, when meeting exceptionally welcoming Ariadne staff and Jo Andrews almost hugging and saying how happy she is that Georgian representative is attending the meeting, proved that I actually had no reasons to be anxious.

For me, Ariadne is a space which brings people with similar ideas, concerns, aspirations and puts them together in order to share and broaden those ideas, concerns, aspirations and learn from each other’s mistakes and shared experiences. Break-out sessions and briefings gave me excellent overview of what up-to-date concerns of Europe and the world in general are in regards to human rights; this enabled me to see my work, as a women rights defender, in a bigger picture and relate to some of the concerns and challenges that we face.

I enjoyed how Ariadne meeting gives a feeling of a community; probably it should not be too surprising because most of the people know each other and have been attending the meeting for years, but what surprised me was that it welcomes newbies and gives them chance to fit in and be part of this community as well. I found this phenomenon exceptional.

Overall, I did not expect the meeting to be so joyous, enjoyable and at the same time very productive. With my recommendation, Women’s Fund in Georgia decided to become a member of Ariadne. If I relate to Goddess Ariadne, Greek mythological character in charge of mazes, I hope that Women’s Fund in Georgia will successfully pave the way for discovering the “labyrinths” of the Ariadne network.