Ariadne > Blog > Home Feature Below > Chic and free nor more? A visit uncovering shrinking space for civil society and limits to fundamental freedoms in France, by Peter Matjašič, OSIFE

Chic and free nor more? A visit uncovering shrinking space for civil society and limits to fundamental freedoms in France, by Peter Matjašič, OSIFE

Chic and free nor more? A visit uncovering shrinking space for civil society and limits to fundamental freedoms in France, by Peter Matjašič, OSIFE 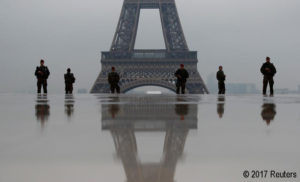 French soldiers patrol near the Eiffel Tower as part of the « Sentinelle » security plan in Paris, France, May 3, 2017. REUTERS/Christian Hartmann

In this blog, Peter Matjašič, Senior Programme Officer at the Open Society Initiative for Europe (OSIFE) reflects on the site trip to VoxPublic, a visit uncovering shrinking space for civil society and limits to fundamental freedoms in France. The visit was part of Ariadne’s 2018 Policy Briefing held in March in Paris.

As part of the good tradition of Ariadne’s annual policy briefings, there are site visits for participants to get a better understanding of the context and operating environment of the host city and country. This was particularly relevant in this year’s edition as we found ourselves in the capital of chic and a country that prides itself on the motto of equality, fraternity, and liberty. However, if one takes a closer look and dares to question these ideals, the reality soon shows its dark sides. This is exactly how the off-site visit to VoxPublic, a relatively new French actor that works to strengthen the capacity of civil society and organised citizens to take part in public discussions and call out political leaders, and their partner organisations helped unveil.

Space in France is not closed but shrinking[1]. For specific populations this phenomenon is happening more rapidly, with the trigger being terrorist attacks and ensuing civil society legislation (state of emergency and abusive elements of power within that) confining civil society. There is a lack of avenues to approach politicians, lack of respect for CSOs and lack of acknowledgement of their role to speak for populations, and negative effects of public funding cuts. The abusive nature of state of emergency measures in France was most prominently used against COP 21 freedom of assembly restriction and putting environment activist under house arrest: such measures have been a constant feature for specific groups of the French society, particularly Muslims. Issues are also discrimination, racism, etc. with many taboos towards minorities.

It was therefore fitting to visit VoxPublic, created in 2016 in response to growing social injustices and discrimination based on gender, religion or other reasons after and during the state of emergency after the terrorist attacks in France. VoxPublic founder and director Jean-Marie Fardeau shared his view on the situation that dispelled any doubts that France is indeed a place where institutional racism, police brutality, and social exclusion are affecting a large segment of French citizens. He also spoke of the work they do and presented some of their initiatives, such as the anti-terrorism freedom network, mapping of migrant and refugee friendly towns, the Action Rights Democracy network, and gatherings that link up French associations with civic-tech companies. VoxPublic is a resource center, a hub for groups not organised yet, a convener and advocate, and in a small scale even a re-granter.

We also had the privilege to hear from three other groups that all in their area of expertise painted a similarly dire picture of France. Manon Fillonneau from CNDH RomEurope and William Bila from La voix des Rroms, a French grassroots organization created in 2005 by Roma and non-Roma students and activists to tackle intolerance, racism, anti-Gypsyism, and social exclusion and to promote the civic participation of Roma people, spoke about the plight of French Roma and travellers (gens du voyages). Omer Mas Capitolin, who leads the Maison Communautaire pour un Developpement Solidaire (MCDS – Community house for a solidary development), spoke passionately about the rare and valuable work with racial profiling, police abuses of power, police relations with the public and related activity has progressed in the last years in Paris. MCDS is currently one of the only organizations in France that works in a systematic manner with young people in their local communities on issues of police discrimination and police-youth relations.

In my view, this visit gave many of us the wake-up call we needed to realise that unfortunately even at the core of Western Europe and the EU, the space for civic action is shrinking and that there is a big change and shift happening in terms of understanding and respecting human rights and civil liberties. Luckily, this situation is also giving birth to new approaches, ideas, initiatives, and as funders, we need to be ready to better understand this and find ways to support it.