By Kristina Stockwood, Gulf Centre for Human Rights (GCHR), in collaboration with a MENA-based activist whose name we’ve withheld for security reasons

Since its founding, the Gulf Centre for Human Rights (GCHR) has been fortunate to benefit from funding from donors who believe in power sharing and shifting to build relationships based on trust and equal footing. One foundation took a chance on us in the beginning and helped us grow and secure support from other donors. Their staff joined us at regional events and consultations where they could see human rights defenders at work and where they learned first hand that GCHR’s own work is community driven, informed by testimony from human rights defenders from the region.

Ten years ago, it was hard to find funding to support human rights work in Gulf countries because they are classified as rich, which prevented many donors from prioritising the region despite a total lack of civic space. GCHR was founded in 2011, around the time the Arab democracy movement began. Soon after, our co-founder Abdulhadi Al-Khawaja was arrested in Bahrain and sentenced to life in prison. Since then, the crackdown leading to imprisonment or exile for local human rights defenders has been massive. As a result, we have fewer local human rights defenders who are able to work safely on the ground, and there is an immense need to support them.

Core, flexible funding is especially important since the political context of the Middle East and North Africa (MENA) region has continuously closed civic space, and security situations change frequently, leading to instability that can affect the best laid plans and strategies. Over the years, we have seen an improvement in the number of funders that provide core support as opposed to only project support. In our early years, the focus on project support left us with projects where we didn’t have enough staff to adequately resource them.

Core, flexible funding from human rights donors has allowed us the versatility we need when working in emergency situations, when we must adapt plans to address urgent needs or respond to security threats to us or members of our network. For example, in 2017 GCHR’s own advisory board member, Ahmed Mansoor, was arrested and sentenced to 10 years in prison in the United Arab Emirates for his activism. Having access to flexible funding allowed us to carry out regular advocacy at the United Nations and the European Union to push for his freedom, while also coordinating innovative campaign efforts with partners. While Mansoor remains in prison, previous advocacy efforts to free our other co-founder from Bahrain, Nabeel Rajab, were successful and he remains free. 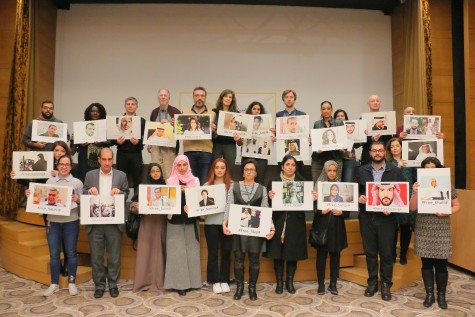 A GCHR action calling for the release of human rights defenders in the Gulf and neighboring countries.

In the wake of the pandemic, our grantmakers exhibited another principle – collective care – by reaching out to check if we were doing okay and allow us to extend grants due to Covid-19 impediments. Some donors even said we could use the grant money for a completely different activity if our needs had changed and we had funds remaining. The Urgent Action Fund for Women (UAF) has been very focused on providing resources for collective care, including supporting collective care workshops for women human rights defenders.

Something that hampers our work is that some donors still have arduous reporting requirements asking for statistics we can’t easily provide without invading the privacy of human rights defenders, or that are overly long or bureaucratic, with technical requirements. This can get in the way of us actually implementing our program activities and addressing the massive violations across our region. While we support full accountability to every single penny, we encourage donors to only ask grantees for annual reports for multi-year programmes, and move toward fewer reporting requirements overall. It’s also hard to promise positive outcomes in a short timeframe, such as revisions of repressive laws, so we need grantmakers to be adaptable and understand that it can take time to see results.

Finally, if many donors redirect funding towards one specific geography or restrict it to a specific theme – no matter how urgent the need –  this poses challenges to NGOs on the ground in regions such as the MENA. Here, local human rights defenders are fighting for basic human rights, such as food and work in Iraq or Yemen, the right not to be arrested for a tweet in the Gulf region, or stable sources of electricity and Internet, such as in Lebanon right now, where GCHR’s office is based. Donors in crisis regions must consult with local NGOs and make sure their support is community-driven, because every region has its own challenges and needs.

Human rights donors are critical partners in GCHR’s work and we have come a long way together over the last decade. But we can’t help but imagine how much easier our work would be if all donors made grants with the human rights grantmaking principles in mind.