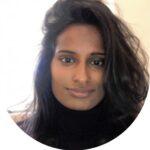 This post was written by Mathu Jeyaloganathan, Head of Investment at UnLtd. It is cross-posted from the UnLtd’s website (the original can be found here).

When UnLtd and our partners launched the Social Enterprise Support Fund (SESF) in July of this year, the UK and the worldwas going through a social awakening. The death of George Floyd in the United States catapulted the Black Lives Matter movement, racial injustice and inequity into the daily conversations of individuals, families and organisations like UnLtd.

At UnLtd this catalysed a series of conversation about where we needed to do better. One of the results was a commitment from UnLtd to make 50% of our awards to Black, Asian people or those from minority ethnic backgrounds and/or disabled people. We also continued to encourage social entrepreneurs with lived experience of the issues they were tackling to apply. While we made this commitment across all our award making, the SESF was the first major fund to see these applied in practice.

The Social Enterprise Support Fund was established in partnership by The National Lottery Community Fund and five social enterprise support agencies: Big Issue Invest, The Key Fund, Resonance, the School for Social Entrepreneurs (SSE), and UnLtd with support from CAF Venturesome, the Young Foundation and Ashoka. £18.7 million of National Lottery funding has been committed to the fund, made possible by National Lottery players.

Fast forward to November, and £6.3m funding has been distributed by UnLtd through the SESF. Here’s where we landed:

– 52% of UnLtd’s grants went to people identifying as Black, Asian, from a minority ethnic background and/or disabled

– Importantly, this represented just over 52% of the total value of our grant pot
79% of UnLtd’s grants went to people who reported they had lived experience of the issue they are tackling

– This has the unintended consequence of funding also being clustered in places that score higher on the Indices of Multiple Deprivation, or to put it another way, communities with fewer resources were awarded more of the funding. You can explore more of the data here.

So how did we get to these figures? Inclusion and diversity were a target we set from the outset, and these themes and conversations ran through every aspect of our work. But, it was our focus on applying principles of equity, not equality that helped us get to where we are. 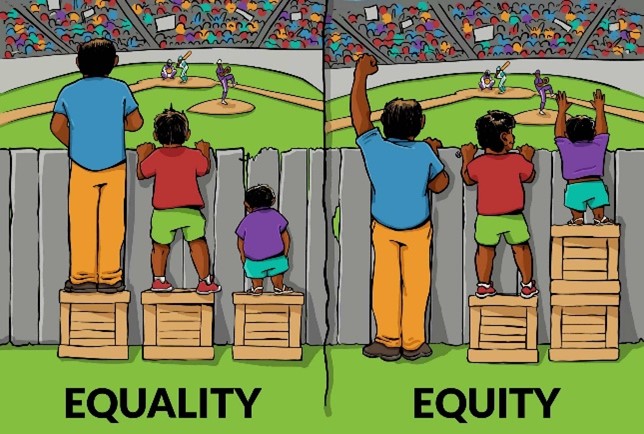 Equality means giving everyone the same access to resources, whereas equity involves distributing access to resources based on peoples’ needs. On the left side of the illustration above, for example, three identical boxes are given to three people of different heights—it’s an equal distribution of resources, but it fails to consider that the tallest person doesn’t need a box to see over the fence, while the shortest person could clearly use an extra one. When the boxes are redistributed equitably, as seen on the right side of the illustration, all three spectators can watch the game.

So how did we apply equity in practice? Here are three key takeaways:

UnLtd has long had an ambition to put social entrepreneurs at the heart of what we do. Asking seasoned entrepreneurs to help us to be part of our decision making processes is one way of doing this. We could have chosen to rely on volunteers, but we recognised that this privileges those with time and resources and means the groups we were looking to target were even less likely to be represented on the panels. So for SESF, we paid social entrepreneurs who gave up their time, reaching out specifically to Black, Asian, minority ethnic and/or disabled entrepreneurs to participate in our decision-making process as panellists. We also paid diverse outreach partners to reach out into their networks to encourage applications from groups where we had less existing access. It was very important to UnLtd that everyone was paid because we already know that people from these backgrounds are systematically underfunded compared to their white and abled counterparts and also have to deal with operating in a world of microaggressions, stereotypes and numerous other barriers. (See for example research from Voice for Change England and Centre for Innovation Management Research)

When we have conversations on how to be more inclusive, one of the first comments that always comes up is, where is the data? How do we know that there is a problem, what the problem is and how we solve the problem if we don’t have data? In the UK, there is no single report that provides data on diverse social entrepreneurs and the challenges they face, and it is difficult to find holistic solutions without them.

At UnLtd, we wanted to use data to drive our decision making. To do this we needed to use real time data to allow for real time decisions. As we had four different decision-making panels (panels composed of a majority of people identifying as Black, Asian, from a minority ethnic background and/or disabled) operating simultaneously for a week, panel members didn’t have sight of all of the decisions being made. So we changed that. At the outset of every day, we provided panel members with data on all decisions made on the prior day including diversity and inclusion data in tandem with award sizes, approval and rejection rates and forecasted spend. This allowed panel members to be aware of any biases and trends that were coming up in their panels. Real time data allowed for real time decision making.

3. Helping spectators to see the game

We knew we needed our version of helping spectators to equitably watch the game. We wanted to ensure all social entrepreneurs, whatever their background, had a fair chance of success.

From past UnLtd data, we knew that entrepreneurs identifying as Black, Asian, from a minority ethnic background and/or disabled were typically given lower scores for financial sustainability, and the evidence suggested that this was the result of structural bias. This coupled with the disproportionate impact of COVID-19 on Black, Asian, minority ethnic and/or disabled people and entrepreneurs, meant that a traditional single threshold scoring system would unfairly exclude some social entrepreneurs from being considered for funding.

This allowed more entrepreneurs who typically wouldn’t have made it to panels, to get there. Once they reached the panel, social entrepreneurs were then judged on the same criteria of the potential to create impact, sustainability, and resilience as each other. Because our panels included Black, Asian, minority ethnic and/or disabled entrepreneurs, they were also being assessed by those who better understood some of the specific barriers they faced.

Taking forward these lessons into the future

The practices we put in place for SESF helped us to mitigate factors that might otherwise mean underrepresented social entrepreneurs continued to be left behind for funding. This felt like a huge step forward for us as it demonstrated that by changing our organisational behaviours we can also make an impact on what can seem like the intractable problem of ensuring funding goes to those who need it most – rather than those best placed to apply, and do it well.

We will now be taking action to see this through; firstly by paying attention to what happens next to those funded through SESF, and the impact they go on to create. Secondly, by implementing similar measures across other awards programmes and funds. We are confident that by putting equity at the heart of our decision making, we can find, fund and support a much broader pool of people with the potential to transform our world for good.