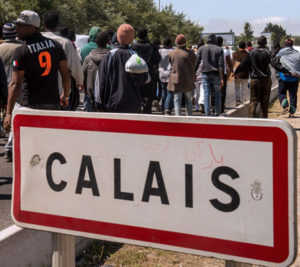 Here is an article by Beth Fernandez, Deputy Director at Sigrid Rausing Trust on the donor field visit to the Jungle camp in Calais on 30th June, organised by ACF with Safe Passage and Citizens UK.

At the end of June 17 grantmakers from different philanthropic foundations visited the Jungle camp in Calais on a trip organised by the Association of Charitable Foundations together with Citizens UK and Safe Passage.

Safe Passage is a partnership between Citizens UK, Islington Law Centre, Bhatt Murphy solicitors and Doughty Street Chambers which uses ECHR Article 8 and the family reunification provision of the EU Dublin III Treaty to push the UK government to consider the asylum requests of unaccompanied minors in French camps who have family members in the UK. After a first successful case in January 2016, 42 cases have been successful and 39 more cases are underway. The UK government since successfully appealed the decision and the team is re-strategising.

The day began with a very brief meeting at Calais Freithun station with four Syrian and Afghan teenage clients of Safe Passage who had just received permission from the UK government to claim asylum on the basis of family links. The four boys greeted us and shook our hands as we wished them luck on their onward journey. The majority of the day was spent visiting the humanitarian operation established by Help Refugees and visiting the camp itself and the various humanitarian actors working there.

The Sangatte reception facility housing migrants and run by the French Red Cross was opened in 1999 but closed in 2002 due to overcrowding. In 2003 the British and French governments signed the Le Touquet treaty in which they agreed to establish juxtaposed immigration controls on cross-Channel routes. This effectively pushed the UK border to France and has made informal refugee camps a permanent feature of the Northern French coast despite regular evictions and razing of the camps by French riot police. The refugee flows witnessed in 2015 and the UK government’s refusal to sign up to relocation quotas only seem to have exacerbated a situation where people travel to Northern France and take huge risks to reach the UK through clandestine boarding of lorries or boats.

The so-called Jungle camp is a combination of formal but mainly informal structures and tents in a shifting area about three miles from central Calais. In November 2015, the French state used converted shipping containers to house up to 1500 of the most vulnerable. This area is surrounded by guards and wire fences and can be entered only by those permitted to live there. In early 2015, the state- run Jules Ferry day centre was opened which provides showers, one hot meal a day, a house for 160 women and children, toilets and phone charging. The idea was for the area around the centre to be a non-official, but ‘tolerated’ camp. There have been numerous evictions as the government has changed and decreased where the tolerated area for the jungle is. The last eviction cleared two thirds of the southern area of the camp in March and April 2016, affecting thousands of people. The French government announced it plans to limit the number of people in Calais to 2000 by the summer of 2016 and the Calais local government has also proposed that the Le Touquet treaty be abandoned, post UK referendum result.

The French state seemed absent from the informal camp other than rubbish collection and riot police stationed at the entrance. MSF was present and Save the Children funds many of the voluntary initiatives in the camp such as a library and youth centre, a space for women, some rudimentary education for children and food distribution. The volunteers we met were mainly British, and had raised money through crowd-funding to come and work in the camp. The warehouse operation run by Help Refugees which organised distribution of tents, clothing, food items, cooked meals, firewood and other necessities had grown into a complicated system with links to Calais businesses. The youth workers told us that the governmental department responsible for taking charge of unaccompanied minors was not very active and required a lot of pressure. In April 2016 the Children’s Commissioner for England called on authorities in France to speed up processing scores of unaccompanied child asylum seekers who may be eligible to come to the UK.

According to statistics gathered by Help Refugees and French charity L’Auberge des Migrants, There are just over 6000 people currently in the jungle of whom approximately 500 are women and 700 are children. 78% of children are unaccompanied. The population shifts and Safe Passage reported that people go missing from the camp and it is difficult to know whether they have moved to another camp, been successful in reaching the UK or whether they moved to a third country. The data collected by Help Refugees and l’Auberge des Migrants showed that approximately 5500 people resided in the Jungle in early 2016; that figure dipped to 5000 when the southern part of the camp was cleared in March 2016 and then rose to just over 6000 in June. The average time spent in the camp is five and half months though amongst the Safe Passage clients and their interpreters with whom we spoke, 7 months was commonly cited.

There is an expectation that the number of women will increase with later waves of incoming refugees. Due to the capacity of the formal structures, the majority of women live in the informal camp area and are highly vulnerable to exploitation and violence. There is an unofficial women and children’s centre run from a double decker bus (donated by Juliet Stevenson). The bus serves as one of the few safe spaces for women to come, chat, and collect essential supplies while also providing a makeshift nursery for their children. In an unofficial survey carried out by Refugee Rights Data Project, 42% of women in Calais said they had experienced violence in the camp; 81.5% said they had experienced police violence; 73% said they felt unsafe in the camp and 56% of women said their health had suffered in the camp.

The camp has become divided along ethno linguistic sectors. The ethnic mix in the camp was approximately 36% from Afghanistan, 32% Sudanese, 8% each from Pakistan and Eritrea, 5% from Ethiopia, 3% from Iraq, 3% Syria and 2% from Iran. Volunteers believed that there was an element of the composition of the camp ‘catching up’ with refugee flows. It was also clear that many of the inhabitants were the most desperate. This partly explains why so few Syrians were in the camp given that their asylum claims have been given preferential treatment by European governments. The relationship between the different ethnic groups could be quite tense, with some anecdotal comments that particular ethnic groups controlled the commercial opportunities such as running shops and restaurants.

This trip was a sobering experience which raised questions about the appropriate role of voluntary humanitarian actors in a space which the State has abdicated, how to push the French and UK asylum systems to work more effectively and how private funders could galvanise systemic change rather than merely plugging the gaps left by government.