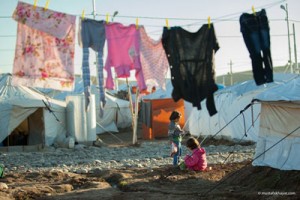 The next Ariadne and IHRFG tele-briefing on the Refugee Crisis – Addressing the Refugee Crisis & Supporting Civilians in Syria – will take place on Monday 12th October at 15:00 BST, 16:00 CEST, 10:00 EST. During the tele-briefing we will look at how funders can address the core needs of civilians fleeing a war as well as those who are building civil society responses within Syria.

We will hear from funders supporting projects on the ground, look at the gaps and the entry points in Syria and at promising approaches for refugee programs.

Bassma Kodmani from the Arab Reform Initiative and Marieke Bosman of the Asfari Foundation will join us to consider how funders can best intervene at each level (tbc). Elizabeth Palmer, from the Ariadne Board, will moderate the call.

To register, please click here (portal login required). Please note that the event is for funders only.

Meanwhile, here is an update from Hanneke Hazeveld, the Ariadne Netherlands Coordinator on the Refugee Crisis in the Netherlands.

Estimates of the number of refugees entering The Netherlands are being revised nearly every day. Last week estimates were 300 per day, increasing to 500 and 700 by the end of the week. On Thursday the government called on city mayors to arrange an additional 1500 beds for the coming night. During the week between 4000-4900 refugees arrived in The Netherlands, which is a country a little bigger in geographic size than the US state of Maryland, but with a population of around 16 million (a little less than Florida’s).

Not surprisingly right wing politics love to talk about “the country is full enough as it is” but civil empathy has been clearly invoked; if you write the Dutch word for refugees (Vluchtelingen) into facebook the list of supportive civil initiatives explodes. Nearly every city with a shelter has one or more locally driven support pages. People are cooking to welcome to those who have arrived, neighbourhoods are taking refugees around their city, families offering to accommodate them in their homes, coats and blankets are gathered. Generosity seems, suddenly popular. This is certainly a refreshing sound after the years of negative imagery, but there are fears it will be short-lived as the populist leader Geert Wilders and his right wing party try to spread fear and aggression.

Empty prisons, conference centres and other public buildings are being turned into emergency centres to house the refugees. Nijmegen city council has set up a camp of tents to house 3,000 refugees, and the distinctive dome prisons in Arnhem and Haarlem will house several hundred asylum seekers, as will the Jaarbeurs exhibition centre in Utrecht. Amsterdam has also agreed to take in 1,500 people, 400 of whom will be housed in a former prison in the Havenstraat. The rest will be spread between two sports halls and a former council office.ng. However, far more needs to be done, because refugees with permission to stay in the Netherlands will eventually need permanent housing.

Dutch hybrid funders who receive government funds for development work such as Cordaid and Oxfam Novib criticised the use of development money for ‘non development relevant issues’ such as housing refugees in the Netherlands. And a ChristenUnie MP submitted a motion to parliament last week calling on the government to set aside more cash specifically to help refugees without taking money from the aid budget.

If you are interested in seeing which organisations are active in supporting refugees in each country there is a list in the files of this community here (requires portal login) and for those interested in the numbers, UNHCR has launched a new interactive data portal tracking arrivals in Europe.