Ariadne > Blog > Home Feature Below > Responding to the Refugee Crisis in Europe: What Role for UK Foundations?

Responding to the Refugee Crisis in Europe: What Role for UK Foundations?

Responding to the Refugee Crisis in Europe: What Role for UK Foundations? 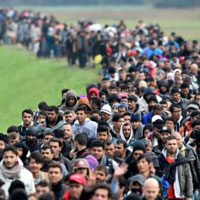 Here is an article by Hannah Stevens, Programme Assistant at Ariadne, following the meeting on the Refugee Crisis and the role of UK Foundations in London on 25th October 2016, organised by Ariadne and the Association of Charitable Foundations. Representatives from UNHCR UK, UNICEF UK, Open Society Foundations, Comic Relief and ShareAction joined the panel discussion.

63.5 million people around the world are on the move; the highest level of displacement on record. Whilst not down-playing the severity of the situation in Europe, what European governments should be doing is a small percentage of what governments in other parts of the world are doing.

The world’s International Organisations have not been required to work ‘on the ground’ in Europe for some time, under the realistic expectation that should there be a crisis adequate systems would be in place. Donor governments, including European donor governments, were warned by these organisations that the rapidly deteriorating situation of refugees would endure unless more resources were injected. Alas, they were largely ignored by governments engaged in a ‘crisis of politics’ and so the increased movement of refugees to Europe in the summer of last year came to be.

The activities of funders can complement those of more traditional actors. For example, the refugee crisis has become so complex and political that many International Organisations are no longer able to do the advocacy they wish to. But, many funders have the authority and knowledge required to engage in high-level discussions and speak out in the media.

For this pro-refugee and anti-xenophobia advocacy to be effective it must be evidence-based. Funders are encouraged to engage with research projects committed to providing evidence to support this advocacy; to hold back the tide of misinformation and hold people to account.

More research is required to identify barriers to integration for refugees in the UK and Europe. The integration of refugees is increasingly important, and much of its success will result from the efforts of community groups, rather than the state. So, whilst respecting each other’s expertise, funders are encouraged to collaborate with these community groups. Intermediaries such as Citizens UK could potentially moderate.

In line with the belief that the current refugee situation in Europe is no longer a ‘crisis’ but the ‘new normal,’ those funding in Greece are encouraged to think long-term and seek to make life easier for those who are unlikely to be relocated. Funding has been reactive rather than proactive; whilst a significant effort has been made to maintain camps there has been a lack of funding for legal aid, community empowerment, data collection and messaging, supporting new voices in policy-making and unaccompanied child refugees.

Increased support for child refugees, who have very specific rights and needs, is especially urgent. More and more child refugees set out unaccompanied or become separated from family and friends on their journey. Most set out with a route in mind; seeking to reach a person rather than a place or a benefits system. A child’s definition of a safe place is very different to our idea of a first safe country.

Unaccompanied child refugees are especially vulnerable to exploitation when they are in transit, and further evidence is required to determine the moments of their journey at which they are most vulnerable. The specific rights and needs of children do not cease to be important when they reach their destination or are static for a while. More than a quarter of child refugees have some form of PTSD from their journey or from their experiences before leaving home.

One of the most thought-provoking responses to the refugee crisis has been the role of individual volunteers. It is both extraordinarily sad and inspiring that volunteers rather than governments have done most of the work. However, this kind of volunteerism is not always sustainable. It might be in response to an image in the media, but how can this level of commitment from volunteers be sustained when the crisis is not as visible, yet just as serious? An option could be to absorb volunteers into agencies with service-level agreements.

Finally, at a time when right-wing politics is on the rise, just as our governments fear being seen to be ‘soft on refugees’ our grantees are afraid that engaging in certain activities will lose them the support of their funders. As funders, therefore, we must be vocal in our support of our grantees.

Our speakers agreed that during moments of crisis, as funders we must take a leap of faith, put our usual processes aside and inject cash quickly. They shared with us some of their lessons learned.

Firstly, the situation is volatile and constantly changing, making it difficult to strike a balance between providing Trustees with sufficient information and requesting it from an organisation which is under significant pressure. Secondly, it is essential to find a way in which to move through existing grant-making systems quickly; one organisation managed to get a grant processed in 36 hours! It can also be difficult to measure the impact of these emergency grants; trustees of one organisation decided that they are contributions, not attributions.

In relation to growing anti-immigrant sentiment, our speakers referred to the importance of funding themes rather than groups of people. The Lebanese government learned that conducting activities which exclusively focus on refugees can create tension, and so instead they focus on systemic issues. An example of this in the philanthropic sector is the organisation that funded a kindergarten for an entire community in Serbia, causing the local community to immediately see the benefit of living with a refugee population.

To conclude, as European governments engage in a ‘crisis of politics’ which renders then unable, if not already unwilling, to adequately respond to the current refugee situation, our speakers identify gaps which can be filled by funders. For many, their engagement with the issue of migration will be new, and even for those for whom it is not, funding in the context of a ‘crisis’ throws up a multitude of questions. Answers to these questions will be found through collaboration; something Ariadne seeks to support its members to achieve.

To keep up to date and contribute to the ongoing discussion on funding the refugee crisis, Ariadne members can join our ‘Refugee Crisis in Europe, Middle East and Mediterranean’ portal community.