Ariadne > Blog > Home Feature Below > Our Responsibility as Funders of Activism in Closing Spaces – The View from Russia, China and Indonesia 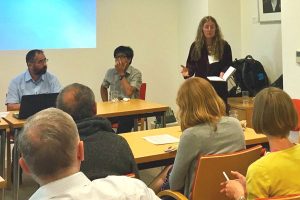 Much has been discussed and written in the last couple of years about the closing space for civil society and many great efforts, notably those led by Ariadne, are underway among funders to strategise and collaborate in our response as grantmakers, advocates and creators of counter narratives. However, we rarely get the opportunity to hear those who work under ever more restrictive circumstances talk about their own strategies and coping mechanisms and to listen to their views on what is needed from the international philanthropic community.

Hence the significance of the meeting on 6 June, when JMG Foundation and Global Greengrants Fund brought together seven environmental and social justice activists from China, Russia and Indonesia.  The purpose of the meeting, which included representatives from environmental and human rights foundations, was to get an update on the situation in the three countries and discuss our responsibilities as funders of their work.

The seven activists were in the UK for a summit on forests and the global paper industry organised by the Environmental Paper Network (EPN). The issues provide a useful case-study on the intersection between the environment and human rights, highlighting as they do the devastation of ecosystems through corporate actors and the abuses of human rights such as displacement and land grabbing.

The paper industry is responsible for more greenhouse gas emissions than the aviation sector, yet the problem is entirely solvable because paper can – and should – be produced both ethically and sustainably.  Meanwhile, however, Indonesia has the fastest rate of deforestation in the world; China is the biggest consumer, producer and financier of the paper industry; and in Russia, the largest intact forests in the world are under increasing threat. What all three countries have in common is an ever more restrictive environment, opposed to any kind of activism, either against social injustices or against industrial growth at all costs.

Although pessimistic about the future actions of their governments, the seven activists at the meeting all said that civil society in their countries continues to grow and that new movements are emerging in response to the challenges that they face.  What then is our responsibility as funders of these movements? Are we, as one participant suggested, much like the Christian missionaries of old, following our own agenda without regard for local needs?  Should our funding be directed rather towards growing local philanthropy that may be better attuned to the wishes, needs and priorities of local populations, whether or not these priorities accord with those of international grantmakers and NGOs?

The response from the activists was loud and clear: international partnerships offer more than just cash in the bank – they foster collaboration, share expertise and help communication. Far from being exploitative, the relationship, they said, is “mutual and symbiotic”, especially when individual funding or campaigning partnerships are embedded within well-functioning networks. For example, the Environmental Paper Network is able to match-make, enabling activists in countries with limited freedom of speech to collaborate with those in countries where there is greater freedom to protest. This works especially well if the latter country is a consumer market for environmentally-damaging products from the former.   Collaboration between international partners has after all been the basis of many successful market-based campaigns.

Funders at the meeting also defended philanthropists engaged in international grant-making, pointing out that activism needs to be funded from somewhere and local philanthropy (in general) is just not there yet. Strengthening local philanthropy is and will become ever more important, but communities face very urgent issues that need to be addressed now. In order to interest local philanthropists in places like Russia or China in the difficult, “political” issues, we need time and donor-to-donor engagement. How are we as funders engaging with our domestic colleagues in the countries where we fund? What kind of approaches would best encourage both more local social justice funding and also domestic donor advocacy with the aim of opening up the closing spaces for activism? And perhaps looking at the intersection of human rights and the environment could just be the key here.  After all, environmental damage and resulting threats to people’s health affect us all, rich or poor.  The determination to protect and preserve our environment will eventually lead us to transform our entire way of life. The challenge the activists put to us as environmental justice and human rights funders working internationally is that it is our responsibility to collaborate more, both across our sectors and with our domestic colleagues in their countries.