Ariadne > Blog > Home Feature Below > Sharing data responsibly – How and why do human rights funders share data? by Tom Walker and Fieke Jansen, The Engine Room 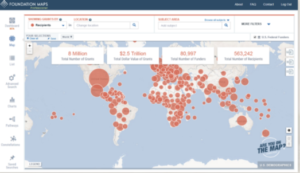 In this blog, Tom Walker and Fieke Jansen of The Engine Room, with input from Rachel Rank of 360 Giving and Lorena Klos of Ariadne, examine publicly available information on how and why human rights funders are sharing data. The blog is part of a new project between the three organisations to create a decision-making framework to improve data-sharing practices and is cross-posted from the The Engine Room’s website (original can be found here). A second blog looks at responsible data considerations for sharing human rights data – what do we already know?

Human rights funders hold an immense amount of data on their grantees and the people their grantees work with. How do they share data about their grants and grantees with others, and how they can do so while minimising harm?

With Ariadne and 360Giving, The Engine Room is starting a project to look into these questions, supported by Digital Impact (part of the Digital Civil Society Lab at Stanford University).

We want to understand why funders share data, how they share it, and the challenges they face in doing so responsibly. We’ll be surveying a wide range of people and interviewing funders about their experiences, with the ultimate goal of producing a framework that can help them to make informed decisions.

But first, we wanted to find out what’s been done already. So, we scanned publicly available information from research reports to funders’ data-sharing policies, and summarised what we found in two blogposts.

The first post looks at funders’ publicly stated reasons for sharing grantee data, and suggests common ways that data is being shared – both with the public and with other funders. The second post discusses how funders are approaching the responsible data implications of sharing grantee data, as well as steps they’re taking in response to those issues.

What have we missed? Whether you’re a funder or a grantee that’s been asked to share your data, we’re keen to hear from you – it will help us make the project as useful as possible. Get in touch.

Funders have a variety of motivations for sharing data about their grants and their grantees. This initial scan suggests that these motivations may vary depending on who the data is being shared with.

When funders share data with the public, it’s often because they want to be transparent about their activities, highlight the activities of individual grantees, or communicate more clearly about what their work involves. When they share data with other funders, it’s usually to help them make more informed decisions about how to use their resources effectively, or improve their internal grant management processes.

Separately, funders suggest that they share data with other funders for two key reasons:

Funders’ methods for sharing grantee data appear to depend on who decides to share it. This landscape mapping exercise found that data is usually either shared as part of an organisational commitment governed by internal policies and procedures, or on a less formal basis by individual departments or programme officers.

Sharing with the public through online databases: Some funders publish basic grantee data online in searchable databases hosted on their own websites – such as those by the Sigrid Rausing Trust, Fonds1818, the William and Flora Hewlett Foundation, the Oak Foundation, the Esmee Fairbairn Foundation or the Open Society Foundations. Other funders, such as the Joseph Rowntree Charitable Trust, publish an updated Microsoft Excel document detailing their grantees. These typically include a description of the grant, the value of the grant, the grantee’s name and the thematic priority that the grant falls under. In many cases, data is published under a Creative Commons CC-BY-SA license, as with the US-based Foundation Center’s data portal.

Sharing data with the public through publishing to open data standards: The online databases described above do not usually make the data available in formats that are designed to be comparable across a sector. An increasing number of funders now publish data according to open data standards, which make it easier to publish data in consistent formats that can be easily analysed or used in different contexts: the International Aid Transparency Initiative (IATI) Standard and the 360Giving Standard (which is designed specifically for data from grantmakers) are notable examples.

Funders using these standards publish data about the organisation itself, as well as the activities the organisation carries out. A range of organisations, such as the David and Elaine Potter Foundation and the Lankelly Chase Foundation, publish to the 360Giving Standard (view the full registry of publishers). Participating IATI members, including foundations like the Gates and Hewlett Foundations, publish a part of their grantee database (view the full registry of publishers).

Sharing data with third-party groups conducting research: The best example of this is the Advancing Human Rights Initiative platform, which analyses grantee data submitted by funders to generate insights on how funding is spent, and finds potential overlaps and gaps. Datasets used for the analysis include grants data submitted by members of the Human Rights Funders Network, Ariadne, and Prospera, the International Network of Women’s Funds, as well as the Foundation Center’s annual FC 1000 dataset from 1,000 of the largest US foundations.

Sharing data with other funders in the form of financial and narrative reports: In some cases, a human rights funder might manage a programme on another funder’s behalf, or on behalf of multiple funders (such as in a ‘basket fund’ or ‘pooled fund’ – see the Thomas Paine Initiative hosted and managed by Global Dialogue for an example). In these cases, they will be required to report back to their ‘back donor’ or donors (the lead funding organisation on a given project) in a similar way to grantees, sharing grantee and management data through narrative and financial reports. The data and reporting processes used are not usually publicly available, and are likely to vary according to the organisation’s internal data management requirements and processes.

In some cases, programme officers may share grantee data with other funders as part of their grant management process, or during their participation on grant advisory committees.

In some cases, staff working at one funder may also sit on another funder’s investment or grant advisory committees. For example, the advisory board of the Open Technology Fund includes programme officers from the Open Society Foundations (OSF) and Hivos, while a programme director at the Oak Foundation is an advisory board member on OSF’s Human Rights Initiative.

The data shared in such committees depends on the role that a committee plays in a given programme. In some cases, the information shared might be limited to a funder’s overall programme strategy, while in others it might include individual grantee proposals. Although this can be a formal part of an organisation’s grant management process, it can also be informal in nature – with the type and quantity of information left at the discretion of the individual staff member. Research by the Responsible Data Forum suggested that this type of data-sharing was prevalent in 2014 – we’ll be seeking to find out whether funders feel this is still the case today.

Various groups, such as the European Programme for Integration and Migration, the New Beginnings Fund and the Transparency and Accountability Initiative, bring together various funders, which are also likely to share data internally for decision-making and grant management.

Sharing data as part of the grant management process

Programme officers might share grantee information informally with colleagues and peers to help them vet potential grantees. Funders vet grantees to check an organisation’s track record, ensuring that they are not funding organisations associated with violence or criminal activity, and that the grantee is a legitimate entity (for an example of vetting criteria, see this document detailing one funder’s grant-making procedures in 2014).

The data shared ranges from the name of a potential grantee to details of proposal. The latter also happens when a funder is interested in finding a co-funder for a specific project. When cases of corruption, harassment or other grantee issues occur, funders who share the same grantee can share internal grantee documents like board minutes and email correspondence.

In sum, a scan of publicly available information and the authors’ anecdotal experience indicates that funders share the following types of data about grants and grantees:

Data shared with other funders:

Disagree with any of these? Have we missed anything? Let us know – we’d love to talk. So, what responsible data questions does all this raise? Find out in our next blogpost.