Ariadne > Blog > Home Feature Below > Young feminists are our hope in the climate crisis. The time for philanthropy to step up to support them is now 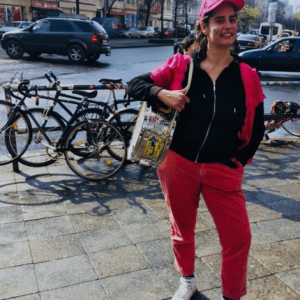 Last November, the world’s attention should have been focused on COP26 (the 2020 UN Climate Change Conference), at which governments were expected to agree to further cut emissions and increase funding to meet commitments to The Paris Agreement. However, like a lot of things, the negotiations were postponed to 2021 due to Covid-19.

Alongside the pandemic, 2020 was marked by fires in the Amazon, typhoons and hurricanes simultaneously hitting Asia Pacific and Central America, severe droughts in East Africa, catastrophic floods in South Asia and continued sea level rise. We are in the midst of a climate emergency, and the planet’s ecosystems and most vulnerable communities cannot afford another year of inaction.

Systemic change can redefine society’s relationship with our ecosystem, but we need commitment from all sides: governments, corporations, individuals, civil society, and funders. A hundred billion dollars are needed for a just transition, and this has to include funding for critical intersections such as gender justice. Industrialised countries must be the first to provide this funding as they have historically been the main polluters. But, philanthropy is another important actor in mobilising resources and must urgently step up due to the severity of the crisis and the need to redistribute the wealth that some funders have accumulated through harmful social and environmental practices.

In philanthropy, of late, there have been more conversations around the climate crisis and an increased sense of urgency around addressing it. However, the sector tends to be more supportive of large-scale and conservationist climate solutions, and resources directed to climate change mitigation stand at just $5-9bn, which is less than 2% of total philanthropic funding. This isn’t enough, and doesn’t include urgently needed funding of local resiliency-building which addresses the multidimensional aspects of the crisis, such as its racial and gender intersections.

Women, youth, indigenous peoples, rural and black communities from the Global South hold the least responsibility for the climate crisis yet shoulder its greatest burden. These groups, because of their identities, also endure structural gender-based violence, racism, and homophobia, all of which increase their vulnerability when a crisis hits.

Those on the frontline of climate change impacts are also leading the solutions to it. Feminist youth-led groups are already working at the intersections of gender, climate and environmental justice and challenging patriarchal, extractivist and colonial norms. Kaiso Women’s Group, one of FRIDA’s grantee partners, empowers local young women to lead agro-ecological projects in response to gender-based violence linked to oil extractivism in Uganda. Rise Up!, another grantee partner in Papua New Guinea, trains women and youth in environmental policy to influence the decision-making spaces they have been excluded from, and protect their environment from the devastation of industrial tuna fishing.

The role of feminist youth in ecological transformation is crucial. As a generation, we understand that gender and environmental issues are inseparable, that the solutions to the climate crisis come from systemic shifts, and that feminism liberates both our bodies and our territories from violence. The climate crisis defines our current reality and immediate futures. That’s why as funders, if we want to commit to fighting climate change effectively, we must acknowledge the importance of intersectional, grassroots, youth-led work, and fund it more and in different ways to traditional philanthropy.

There is no data on how much money intersectional youth-led work on climate and environmental justice receives from donors, which is itself an indication of how invisible the funding of gender and climate justice remains. However, we do know that in 2014, only 1% of environmental funding was directed to women-led efforts. We also know that between 2011 and 2015, more than a third of donations made by foundations to work on the human rights of women and girls stayed in North America, far away from those most affected by the climate crisis. LGBTQI+ and indigenous peoples received the least human rights funding of any community in that same period.

The pandemic has taught us to pause and adjust when a crisis hits, and some funders have provided additional and flexible resources for communities to respond to the impact of Covid-19. We are calling on our sector to do the same again, and to tackle the climate and environmental crises with the sense of urgency required.

In 2017 FRIDA welcomed, for the first time, 6 grantee partners whose work lies at the intersection of gender, climate and environmental justice. This has since increased to 20 groups as we stay committed to uplifting this work with flexible, sustained core grants. In 2020, we reflected on our work and our next steps, holding consultations with our grantee partners, staff and allied organisations. This process inspired a forthcoming report and has encouraged us to share some of our learnings with you.

Silos don’t reflect reality; get rid of them

The first lesson learned is about the importance of stepping away from grantmaking criteria that doesn’t reflect how people organise on the ground. Instead of doing separate thematic grantmaking calls – one for young feminists in climate and environmental justice work and another for other feminist struggles – we now make more visible the fact that we support activists whose feminist, ecological and climate justice fights are one and the same. As a result, in our 2020 open grantmaking call, we noticed more applications from groups working at this intersection. On top of this, through our participatory grantmaking process, young feminists themselves decide their priorities and collectively choose where resources go. As experts on their own realities, we trust that collectives organising on the ground know what is most pressing in their particular contexts.

Recognise the diversity and trust the abilities of young feminists

Secondly, the work of young feminists is as diverse as they are themselves. Young climate and environmental feminist activists are just as likely to organise a climate youth strike as they are to build city food hubs or open up healing justice spaces for community members. Their work is responsive to context, and by tackling one social issue they often transform other struggles. As funders, our role is to provide these activists with flexible, sustained core resources so that they can lead the efforts they believe are effective in each moment, as they also build autonomy and independence.

Funding climate and environmental justice work led by girls, young women and young LGBTQIA+ people is challenging, and in reflecting on this journey we have identified some of our own shortcomings. For example, we need a more inclusive and accessible grantmaking call for proposals that reaches frontline environmental and climate youth defenders in indigenous and rural communities. We must rethink how we can be more inclusive of people whose way of communicating is not centered on social media, internet availability, or the colonial languages often used in application forms or reporting requirements. We might also need to consider how we as donors can invest our resources to fill in these gaps by providing internet access, translation from indigenous languages, and other non-traditional forms of support that frontline communities need in order to access funding.

The intersectional work we support must be reflected in our organisational structure. FRIDA’s climate and environmental justice advocacy efforts, grantmaking, and programmatic support throughout a grantee partner’s journey needs to reflect the dynamism and specificities of groups doing intersectional work. As we also integrate these principles within our own organisational culture, we now have staff working on these intersectional areas from a grantmaking and advocacy perspectives; and we are deeply investing in building cross-collaborative work across the philanthropic sector to bring visibility, access, opportunities and accompaniment to those working at the intersection of gender and climate and environmental justice.

Get support and resources to the frontlines

Young climate feminists and environmental defenders face a multiplicity of challenges as environmental defenders, but also as folks in marginalised social groups. LGBTQIA+ youth, women and girls, and people with disabilities face increasing physical and digital harassment, more frequent climate disasters, closing civil society spaces for environmental and gender justice advocacy, media coverage that individualises activism and erases the collectivity of on the ground mobilisation, and the misogyny and racism still present in climate justice activism and advocacy spaces. As funders, we must provide more financial resources and strategic support to the frontlines. FRIDA has paved the way building initiatives to further support young feminist activists: we started a storytelling project to highlight the experiences of young feminists in the climate and environmental justice movement, we ran a media fellowship focusing on unearthing the stories of young feminist organisers in climate justice and we developed resources on digital security practices for activists. But this isn’t enough. The emergency requires a major, collective effort. As we strengthen our own practice, FRIDA hopes to inspire reflection and collaboration amongst the funder community.

It is these same marginal communities which are enduring two, or even three, overlapping crises right now: the pandemic, the climate crisis, and the gender-based violence which has significantly increased over the last year. While the world rebuilds from Covid-19, these groups need plenty of unrestricted, core resources as they also work towards the climate resilience we urgently need. Young feminists doing intersectional gender and climate justice work envisage a more balanced, harmonious relationship between society and nature, where diversity flourishes. If, as funders, we provide more flexible, core and context-responsive support to grantee partners, and allow them complete autonomy over these funds, we could see major transformations in the unequal structures that have led to these compounded crises and build a better future where those at the margins no longer survive but thrive.