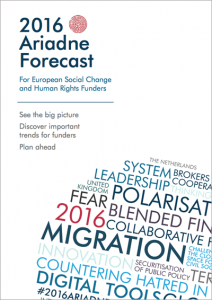 The 2016 Ariadne Forecast is now out, to help us all, as fragile ships on a stormy sea, to see what the weather holds for us over the next 12 months. It has been an immense community effort, and represents the collective wisdom of over 140 social change and human rights grant-makers mainly across Europe, but also internationally.

If you are a funder, this is the place to look for a reality check: is everyone else worrying about the same things as you? What have you missed? What are the emerging trends that will shape your world in the months to come? If you are not a funder but a member of civil society, this is how the world looks according to the funders and how they think it will change in 2016. It should help to understand their mind-set.

So what does the Forecast tell us about 2016? Ariadne funders, both domestic and cross-border, see global instability as the principal problem facing them, but one that takes many shapes. It drives conflict and terrorism, which in turn creates hundreds of thousands of new migrants as well as an understandable fear on behalf of governments and peoples of becoming victims of terror. Unpicking this and trying to find where funders see their own entry points has been one of the main themes of the Forecast. Migration has swiftly become a major point of focus for funders in the past 12 months and most Ariadne forecasters are predicting that it will remain that way in the next year.

We also see the same instability driving the trend towards the Closing Space for Civil Society as governments and institutions characterise civil society as a space for criminal activity and the laundering of funds and adopt a zero-risk approach to it. Of course the trend is more complex than that and has many other causes, tracked through in the Forecast.
Austerity also features strongly. This year we have a global forecast, plus in depth forecasts for France, Italy, the Netherlands and the UK, and it’s in the country forecasts where you can see this playing out with a specific national face in each. A one-page chart summarising trends in each country at the back of the Forecast makes it easy to compare across regions.

It is not all negative: even if necessity is truly the mother of invention, underneath the yells of pain around cuts in public funds and the insecurity there is a thread of invention and optimism. This is particularly marked in the UK and the Netherlands where blended finance and alternative finance are gathering steam, bringing new methods of funding and new funders into the sector.

At the same time, the role grant-makers, and in particular programme officers, play is changing, sometime radically. The old model of a grant-maker sitting in a comfortable armchair and assessing an application on the papers is becoming rarer. Many grant-makers, especially in the public and institutionalised foundations, are evolving into ‘brokers of cooperation’, where they put together much larger coalitions around plans of action to get the leverage they need to bring about wider and deeper change. This is likely to become more pronounced as a number of important foundations move towards an instrumentalist model of operation where they define the problems they want to solve and then gather together the best groups to help them to do this.

If the world of grant-making is more complex than ever before, it is also more fluid, networks are coming of age, the costs of collaboration in various way is coming down. But the corollary is that funders now, more than in the past, need to be ready for the unexpected so that either they can take advantage of a set of favourable circumstances to support change that is important to them, or so that they can protect a group of people who have been, often quickly, adversely affected. As one forecaster said: “We will see a Black Swan event – who will be ready for it?”

Thanks to all the Ariadne members and friends of Ariadne who contributed their time, their views and their energy to the 2016 Forecast, in particular to our senior meteorologists and the ASIFERO and ACRI networks in Italy and the Admical network in France. We hope you find the end result useful.