Ariadne > Blog > Home Feature Below > Gender Lens Investing works. It may just be the future of capitalism! 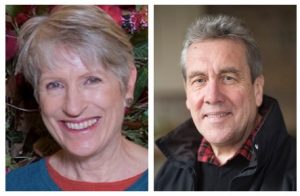 This post was written by Jo Andrews and Bill Taylor. Jo Andrews is founder and a former director of Ariadne and also co-founder of Equileap. She presented the Ariadne’s Learning Series on Gender Lens Investing and wrote and presented the series of podcasts. Bill Taylor, who edited and produced the podcasts, is co-founder of The Lark Rise Partnership, a network of journalists, editors and social entrepreneurs exploring ethical leadership, the new economics and transitional politics.

The five podcasts on Gender Lens Investing will be released every two weeks. You can listen to them on the following channels: iTunes, Soundcloud, Spotify, Stitcher, and TuneIn.

Just before the end of the difficult year that was 2020, the world’s largest investor quietly allocated nearly $3billion to gender lens investing. The move by the Japanese Pension Fund marked an inflection point for Gender Lens Investing. It was a huge vote of confidence in the long-term returns expected from such investments and a moment at which it was possible to see that GLI was moving rapidly from being a niche product for committed social change investors, to becoming part of the mainstream. That is happening despite the global economic lockdown brought on by the COVID pandemic, which has been the first big test for sustainable investing products, which they have passed well.

It makes it a good time to think about what this field can do for individuals and institutions with capital to invest, to looks at how far it has come since it was first defined 10 years ago, and to consider how the principles that underlie GLI are beginning to support new approaches in other fields, such as racial justice and progress for LGBTQI communities.

To do that Ariadne is publishing its first series of podcasts on Gender Lens Investing. The series, supported by funds from the European Commission, examines the role that GLI plays in the growing field of ethical impact investing.

Marvin Owens, an American pastor and human rights leader who now runs an ethical investment house, believes capitalism with a conscience is an increasingly important highway to reform. “More and more investors are not only looking at how their money can do well for them financially, but how their money can also serve their social cause. This is why the impact shares model is really beginning to take off.”

The podcasts look at what Gender Lens Investing means, why data is vital and how to extend the same principles to racial justice and LGBTQI communities. We also provide a guide on how to invest with a gender lens and look at how upheavals like COVID and Black Lives Matter are changing the possibilities in this growing field.

The starting point is that Gender Lens Investing now appears to show clearly that gender balanced work places are connected with better outcomes. Such companies and organisations are happier, healthier and more prosperous. Suzanne Biegel, one of the pioneers in the field, says: “We have so much data now that says – whatever metric you look at – there’s a high correlation between gender balance and women’s leadership and decreased risk and decreased volatility, which is what investors care about as much as they do about upside and improved performance.”

Those metrics are absolutely crucial in confirming the impact of ethical investing. “Data is essential,” says the Swedish investment specialist Karin Forseke. “What you measure is what you get.”

The principles developed in Gender Lens Investing, and green ethical investing before it, are now being re-purposed to support racial justice and progressive change in LGBTQI communities. “What’s going to be really powerful is we are able to leapfrog the thinking around racial equality work because of the work we’ve already done in Gender Lens Investing,” says Suzanne Biegel. “We’re all building on each other’s shoulders.”

Marvin Owens, former senior director for economic programmes at the National Association for the Advancement of Coloured People (NAACP) in the USA, has now helped to create an ethical investment fund thought to be the first of its kind to track racial diversity. He says the new approach has the capacity to incentivise good behaviour in corporations – a new item in the tool-box for a social change organisation more accustomed to using boycotts and legal actions as a route to progress.

For Dorri McWhorter, Director of the YWCA in Chicago, using the markets to challenge discrimination and marginalisation makes complete sense. “The fact is that corporations have the opportunity to impact millions if not billions of lives of women by how they employ them and treat them.”

But, Ise Bosch of Dreilinden Foundation, based in Germany, is more cautious. “If you want a more equitable world, will that goal be reached within the current model of investing and let’s say broadly of capitalism? I really doubt that.” Ise has funded a research study, carried out by Criterion Institute, which looks at how Gender Lens Investing can be extended to include different definitions of gender, and sexual orientation.

Diane Isenberg is one of a new generation of women using capital in a different way and looking to change outcomes with it. Her aim is to improve the lives and future economic prospects of very poor rural communities around the world. “Our mission to address rural livelihoods is to me synonymous with investing in women. I would argue that if you want to work in these kind of communities and make a lasting difference, you have to have a gender lens as part of your work.”

Ethan Powell, a specialist in ethical impact investing, believes that times are changing. Within ten years, he says, Gender Lens Investing and ESG investing more widely will move from being niche products to concepts fully integrated within our market systems.

So, if you want your investments to influence social and economic change and make a return – whether you are a small saver or the steward of much larger funds – how do you actually make that happen? Listen to the series to find out: iTunes, Soundcloud, Spotify, Stitcher, and TuneIn.

We would like to thank everyone who gave their time and judgement for these podcasts. We think you will enjoy listening to their experiences and what they think is coming next.

The content of this podcast series represents the views of the author only and is his/her sole responsibility. The European Commission does not accept any responsibility for use that may be made of the information it contains.