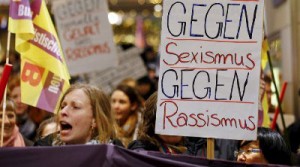 Women shout slogans and hold up a placard that reads “Against Sexism – Against Racism” as they march through the main railways station of Cologne, Germany, January 5, 2016 © Wolfgang Rattay / Reuters

On 22 January 2016, Jo Andrews, Ariadne Director spoke to Karin Heisecke, Senior Adviser at the Amadeu Antonio Foundation’s Expert Centre on Gender and Right Wing Extremism, about the attacks on women in Cologne and other German cities and the political reaction to them. We hope to explore this further at the Ariadne Policy Briefing in Tallinn in April.

1 Why did it take the authorities in Germany so long to realise something dreadful had happened?

Right wing voices quickly claimed that information about the sexual assaults and robberies was deliberately withheld or “censored” because the alleged perpetrators were mostly of North African and Middle Eastern origin. However, other voices emphasized that the cutbacks in funding for the police meant that there were not enough officers on duty, and that the lack of communication between the city’s police and the federal police force in charge of security at the train station, may have been an important factor. The failure of the police and public authorities has been widely acknowledged and led to political consequences: the head of the police in Köln was ordered to retire early, and some have called for the resignation of the interior minister of the region (North Rhine – Westphalia).

For anyone who is familiar with criminal statistics related to sexual violence, it will not be surprising that many of the women who were sexually assaulted did not immediately report this to the police. This is unfortunately the “rule” rather than the exception in Germany: studies show that only between 5 and 15 % or women who experience sexual violence ever report it to the police. The conviction rates in rape cases range from only 4% to 24% (depending on the region in Germany) – these figures are not very encouraging for anyone contemplating whether they should report or not.

It maybe that the events on New Year’s Eve are exceptional in the sense that the credibility of the women reporting sexual assault has not been questioned, which it would normally have been.  This may have led to more women coming  forward to report the crimes.

2 Looking at this from outside Germany, the responses we have heard have been from different politicians, the police, and from the populist right, especially Pegida, but where are the other voices, for instance those of feminists and anti-racists?

Voices of anti-racist, migrants’ and feminist organisations were – and are – there, but they were not as quick in their response and not as loud as those from the populist right.

During the first few days, the populist and extremist right wing voices more or less dominated the public debate, and many even accused feminists of deliberately keeping silent because the alleged perpetrators were foreigners. However, the slow response was rather due to the fact that feminist activists and organisations are overworked and understaffed, in particular for their communications work. So  they cannot respond as quickly as other, better organized and funded groups.

In the meantime, strong feminist and anti-racist responses have emerged and have been given substantial media coverage. The initiative #ausnahmslos has been getting a lot of attention, nationally and internationally: – what is also impressive is how many different kinds of feminists have come together for this initiative.

Amadeu Antonio Foundation has been contributing to the debates through our blog. For quite some time, we have been raising awareness about how the right wing instrumentalises sexual abuse to mobilise support for their agenda, and we are about to release another publication on this topic.

Migrant men in Germany have responded and expressed their empathy and solidarity with the women who were sexually assaulted. The article by the Berlin resident British/Ugandan writer Musa Okwonga has been published in one of the big dailies (in German).

In Berlin, an association of men of Turkish origin organized a demonstration against sexual violence, and male Syrian refugees have demonstrated in front of the main railway station to show their respect for and solidarity with women. What seems to be missing, are the voices of German “indigenous” men being similarly outspoken in their solidarity with women and against all forms of violence against women.

From a “quality of journalism” angle, there are a lot of questions that need to be addressed following the media coverage of these events. Rather than taking the time to research facts, many media outlets referenced each other and inaccurate information was spread across Germany and beyond its borders.

3 What do you think the long-term impact will be in Germany, and more widely in Europe?

The impact, which is already visible in Germany (and to a certain extent also in other European countries), includes an increasing polarisation, which was not created, but was accelerated by these events, and an increased acceptability of policy proposals that were previously rather associated with the populist right.

Politicians have started to propose more restrictive laws, for example to deport non-Germans (incl. asylum seekers) that commit criminal offences. Some conservatives (from the Bavarian Christian Social Union, i.e. a government coalition member) are even calling for the deportation of those suspected/accused of crimes, before conviction.

People are now much more careful in expressing support for refugees. Volunteers in refugee support initiatives increasingly don’t dare to talk about it among their family or friends. In the past weeks, we had an unprecedented number of hate phone calls to our office. Violence targeting asylum seekers and migrants has been on the increase.

There is also potential for positive long term impact:

The issue of sexual violence – and generally violence against women – is now being debated in public. This needs to be sustained to strengthen the movement that has been addressing these issues for decades. We know what the necessary actions are, for example: advocacy to change the law and to ensure implementation, appropriate support for the work of rape crisis and women’s counseling centres, strengthening of prevention measures, starting for example with education that challenges harmful gender stereotypes and fosters equality.

4 How can funders intervene here, what are German Foundations already doing in this field?

Many foundations – and civil society in general – have increased their support for refugees over the past year. Philanthropy in many cases provides support that helps civil society groups to provide fast and un-bureaucratic relief.  After the initial relief work, efforts that help refugees move from “being a refugee” to “being a neighbour” in the communities where they live, will be important. One example is an initiative that we support, where young Germans and young refugees come together to build a skate park.

Foundations’ support for initiatives addressing sexual violence – including support for refugee women who are affected – has been limited so far. Support for work on prevention, provision of services for survivors and political advocacy (to ensure laws are improved and implemented) needs to be increased.

Supporting the strategic communication capacities of feminist and anti racist organisations will be very important to enable them to contribute effectively and in a timely way to public debate.

5 What would you like to see private funders do?

We would welcome a more strategic cooperation between the bigger and smaller foundations that work on refugees and migration in Germany, more learning from each other and from international good practices. Currently neglected areas should be addressed, for example the special needs of women and girls refugees and of refugees with disabilities. It will be important to invest in initiatives that create spaces for Germans and refugees to come together, initiatives that benefit both. There is a lot that needs to be done in the field of “integration”: moving on from the initial warm welcome, to ensuring that the people who arrived as refugees become part of German society.

Private funders should also provide support for the organisations that have been working to prevent and respond to violence against women for decades and who are often struggling. Work on ending violence against women includes the fundamental work of challenging harmful gender stereotypes – among all people who live in Germany. It includes support for work on prevention of violence against women and strengthening the strategic communication and advocacy capacity of relevant organisations. The creation of strong progressive civil society networks and coalitions will be indispensable in the current political climate.

This is an unprecedented opportunity for the anti racism and anti sexism movements to come together. The way that gender has been integrated in the anti racism work at AAS is still exceptional in Germany. Ideally, it would be the rule rather than the exception that the movements work intersectionally.