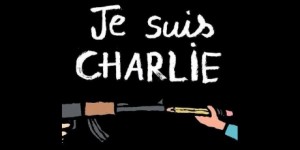 Pavel Fischer is the former political director at the Ministry of Foreign Affairs of the Czech Republic and was their Ambassador to France from 2003 to 2010, in 2010 he was awarded the prestigious French Order of the Legion of Honour. He is now on Chair of the Board of the Prague Freedom Foundation. This blog is his reflection on the terrorist attacks in Paris, last month.

Freedom of Expression is one of the fundamental human rights we have become so used to standing up for over so many years, but still it remains so deeply contested.

As an example, let’s look at some of the countries which are members of the Council of Europe. In Azerbaijan, just after Christmas, the all 12 employees of Radio Free Europe/Radio Liberty were detained in the crackdown against the most professional media outlet in the country, and the Baku bureau has been closed by the authorities. Turkey has also become a country of a real concern in terms of respecting free expression: the number of journalists jailed in 2014 was 40, many of them detained without trial. The open tension among independent journalists and their respective governments in countries such as Montenegro or Serbia, is a matter of fact. In Hungary, a new interpretation of freedom is being developed, and in other countries of Europe, important business interests are challenging the independent media, all of which makes the recent terrorist attacks against the Charlie Hebdo journalists a genuine wake-up call, not just for France, but for Europe as a whole.

What is really going on? Are we witnessing a decline, in terms of freedom of expression, or is this a new era of struggle for freedom? How do we talk about freedom of expression while so many media outlets are in difficulties because of the meltdown of their economic model? What about the use of new social media? Do they help to improve conditions, or, instead, are they becoming tools of hate and intolerance? And how can we help to create spaces that embrace citizen action and enable open dialogue, even in societies deeply restricted by their governments?

As part of this debate at Prague Freedom Foundation, we organized in 2014 a Bridge Summer program, where young journalists from south and north of the Mediterranean spent two weeks thinking about freedom. Part of their training focused on the dilemma between freedom of expression and freedom of belief, and one case study focused on cartoons of the Prophet. We knew the theme was important then, but we could not have imagined that it would become a question of life and of death.

Encouraged by the experience of trying to create a network of young journalists, able and willing to confront these problems, we are about to start preparations for the 2015 summer school. We believe the challenge is of huge importance, even more so now.